A particular announcement for EICMA caught my eye and that’s the Yamaha Tricity 300, which is all new for 2020 and offers a larger version of the Tricity 155.

Lots of people are pretty wary of three wheels, but the Tricity 155 and Niken are genuinely good offerings, and when I rode the Tricity 155 my one thought was that it would be really cool to see it with the powerplant from the XMAX, which is the 300cc engine we’re now seeing it come out with in 2020.

Now in some places you can also ride one of these on a car licence which is pretty cool, especially for getting people into motorcycling, however that’s not the case here in Australia. On the other hand, the extra wheel offers more stability and arguably one of the easiest entry points into riding.

The only downside is more weight and more cost, compared to simply buying say the NMax 155 scooter, XMAX scooter or an MT-09 Tracer (if you’re thinking a Niken).

What makes these three-wheelers work is the LMW Ackerman suspension/steering system, with a parallelogram link and cantilevered front suspension including dual fork tubes on each side at the front.

It’s a seriously cool piece of technology on the Niken where you’re getting motorcycle lean angles, with the same being true on the Tricity 155, but probably a smaller consideration since it’s more of a commuter. On the Tricity 300 you’re getting a bit more of a full function option, which should handle the highway with ease and be a better two-up machine, and while you won’t be trying to get a knee down through the twisties you can still have some good fun of a weekend out for a casual ride through the nice riding roads, and surprise some motorcyclists too!

Now if you’re not interested in three wheels, as anything more than two is too much, fair enough but lets have a look at the details of the Tricity 300. 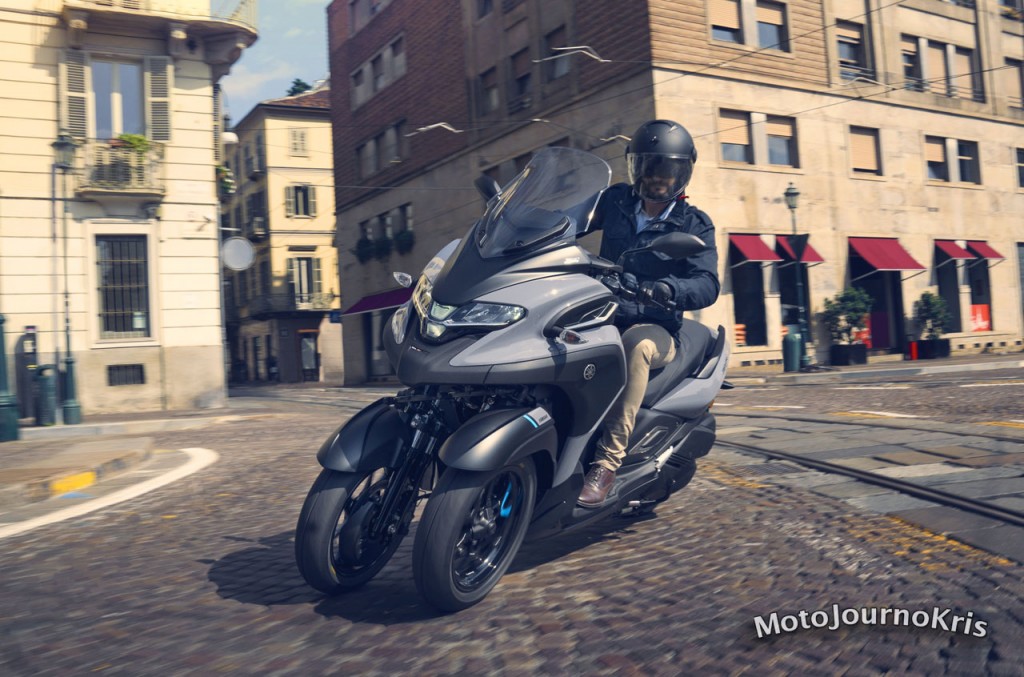 Obviously we’ve got that L-M-W Ackerman front setup, with Yamaha fitting 14-inch wheels to the Tricity 300, where the 155 features a 13 inch rear. This means there’s 267mm rotors on each wheel for a good overall stopping package, with ABS and a unified braking system. It’s worth noting the unified brake system balances front and rear when using the rear, but the front works independently, which is ideal for control, and helps ensure locking up the rear panic braking is less likely, or at least won’t be catastrophic as a first poor rider instinct for the inexperienced.

There’s also a tilt assist system which basically locks the front setup to help keep the bike upright, which was something that would have been good on the Niken, but may have been harder to implement due to its sportier nature. That system automatically holds the front upright at a stop and releases when getting moving.

Quality of life features include LED lighting, an LCD display and a lit two full face helmet storage compartment under the seat, which is nice to see rather than the two jet helmet setups which are so common, which only take two half face helmets. Huge amounts of storage are preferable to me so you can stick your helmet, jacket and gloves under the seat and walk away like you didn’t arrive on a motorcycle. 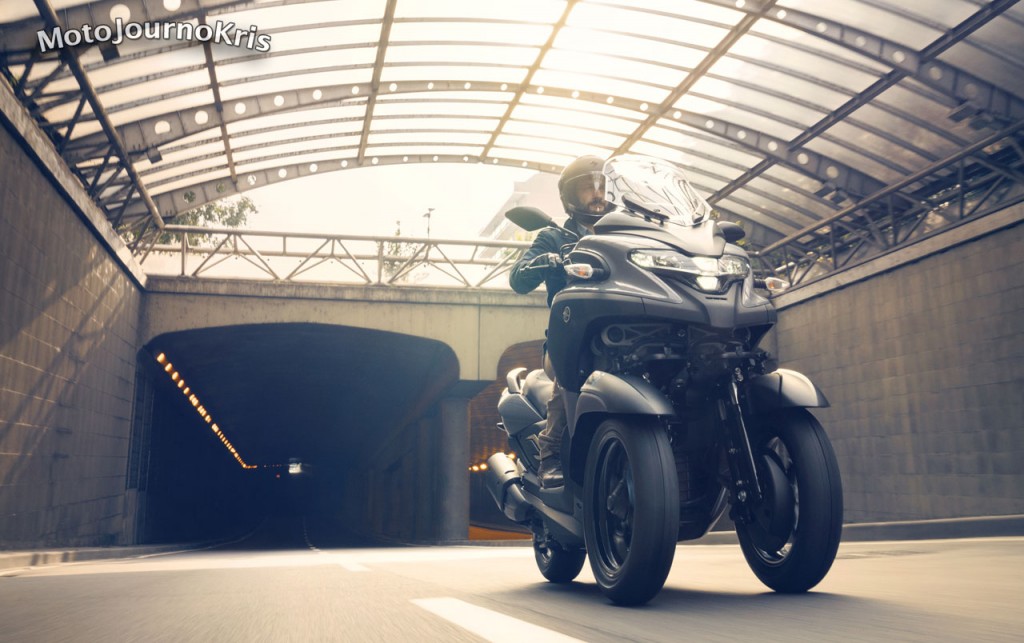 There’s also traction control which is a nice feature to a bit of additional safety alongside the ABS, while Yamaha also note the body is designed to allow an apron and handlebar cover, if you decide to plumb the depths of uncool totalitarianism. There’s a parking brake too, alongside a DC power outlet.

I can’t find a spec sheet at this point, but the Blue Core 300cc single from the XMAX produces near on 28* horsepower on the 2019 model, and has certainly never felt lacking in that department to me, with 29 newton metres of torque also available, and the simple open the throttle and go acceleration making the XMAX quick off the mark.

A new lightweight frame is also featured, so it’ll be interesting to see where the Tricity 300 lands on weight, with the engine also tuned to suit the three-wheeler, with new fuel injector mappings and optimised spray angle on the 12-hole injector for stronger low to mid-range.

Ensuring the Tricity 300 still has that punch off the line will be important too with that extra weight, so it looks like Yamaha have got that covered, and do boast the one-piece forged crankshaft just like on their MotoGP bikes.

Tyres for those 14 inch wheels also also apparently a specially developed set of Bridgestone Battlax rubber with a new compound designed specifically for the Tricity 300, while retaining the Battlax scooter tread pattern. Also notable on the front wheel is the blue highlight, which is a cool feature.

One other feature of note is the Smart Key System, which activates the bike and allows access to the power, start and locks via a main switch. It’s a really cool idea, but having torn my hair out in the past when I couldn’t get access to a fuel cap, or the storage to open, I’d lean towards liking a key system for these personally, even if the ignition can be remote.

Of course it does add extra security, which in many places of the world is an even bigger concern, so I can see why that’s the direction being taken. No one’s going to jam anything into a key hole, or fill it with glue or similar if there’s no hole to have a go at, and you’d hope it’s harder to steal the scooter too – at least as far as getting it started.

Overall it’s cool to see a model I really hoped for introduced, and I look forward to seeing how the Tricity 300 rides, if it’s anything like the Niken or 155 it’ll be an interesting addition to the market.

The Tricity 300 will be available in Tech Kamo, Icon Grey and Gunmetal Grey, with pricing and availability to be announced.

So what do you think? Are Yamaha onto a winner with this three-wheel technology? Three wheeled scooters certainly have a longer history than the Niken and have been around for a while. In fact I suggested my wife try an Aprilia three-wheel scooter when she first started riding a fair while back, but she ended up going for a regular two wheeled 250 instead.